I guess you all already did read in the last few days that Hulu ordered a 10-episodes season of 'How I Met Your Father' with Hilary Duffy to star as the main character,named Sophie. The showrunners wont be CB and CT but sadly it seems they will be 'active' as executive producers,and not there only by name,so they could still write some episodes here and there. But hopefully they wont! By the way what are your thoughts on this? Will you watch it? Is there hope for this show to be set in the same universe of HIMYM,and give us some Barney and Robin cameo? Hopefully they will take this route,setting this show in the same universe of HIMYM would be legendary!

If anyone is interested to watch a "bonus" How I Met Your Mother episode,here's the link of the unaired pilot of How I Met Your Dad
https://drive.google.com/file/d/10id973oTD-0j2eDJX4nzyjB4hUeRJfcE/view

What do you think about it?

Last night Carter Bays was just commenting Game of Thrones,when suddendly,probably frustated because people were comparing some controversial Game of Thrones decisions with the terrible HIMYM ending,he made a thread 'Ted Mosby-style' where he acts like the classic 'Nice Guy'. He deleted the tweet some hours ago,but you can still find the many replies that people were giving to his thread. Basically what he was saying was comparable to the Ted's monologue in the episode 8.13 (Yes,the terrible 'Robin should be with me' one). He said that people are wrong when they prefer the 'bad cool guy' over the 'nice guy' and that redemption stories are unrealistic. So yes he was defending the destruction of character development he did in the HIMYM ending,basically saying that 7 seasons of Barney's character development were unrealistic. Unbelievable! And he even bring politics into it,saying that people who believes in redemption stories were 'responsible for Trump'. I just can't believe it! I think in that moment he let out all the anger he still feels because people 'didn't understood his great masterpiece' (aka a nerdy Ted/Robin fanfiction). He never learns,doesnt he?

In 7.13 (Tailgate) there is a tombstone that reads "MOTHER". 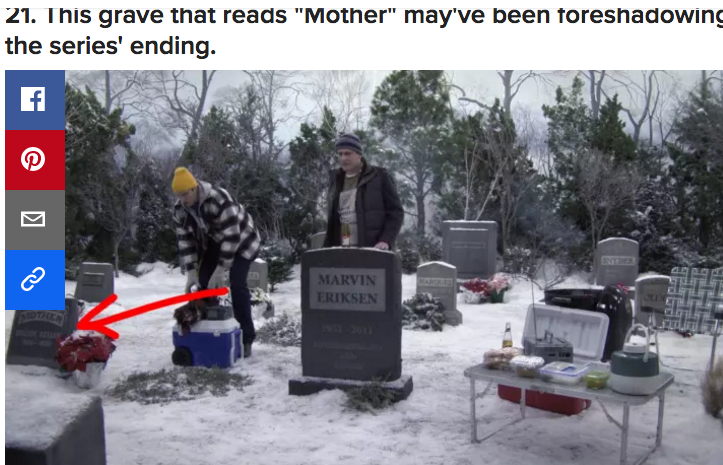 Also, in 6.20 (The Exploding Meatball Sub), there is a flashforward where Barney pretends to be ill. It's clear that Cobie was instructed to hide her left ring finger but it is seen that she has no ring. I believe we discussed this lack of ring in 6.20 and in a flashforward in 8.16 Bad Crazy but unless Robin is in on the joke in 6.20 which she doesn't seem to be then it is consistent with what unfortunately did happen which is the B/R divorce.


P.S I haven't been on here in a long time and only watch episodes occasionally but I miss the community here and what the series was like before the finale.

The 'revival fashion' reached the sitcom genre too,and its probably the best genre in which this 'revival mania' is doing quality-wise. Will e Grace was already renewed for two more seasons,and Roseanne received good critics so far. Both the revival have something in common: they decided to ignore their respective ending,or in some cases the entire last season,and are now continuing the story in another way. I think we all know that,if there is a series who would really need to 'delete' canon-wise its ending or even the entire season 9,its How I Met Your Mother! So,if in a year or two they decide to do a HIMYM revival,where they ignore the ending and we continue the story since June 2013 (or they could do a little timeskip to make it in 2020 or something) or even ignoring the entire season 9 and continuing the story since some weeks before the Barney/Robin wedding,would you like it? I would love it! Tell me what you think about it.

It lives. Specifically at:

Okay, so, the yellow umbrella is the symbol for Ted and Tracy's love story, the blue French horn is for Ted and Robin. Ted, by himself, gets red cowboy boots. We see "suit," we think Barney. For Robin, it's a maple leaf/Canadian flag...but what image would we put to the B/R pairing?

I'm working on a fic tracker for my planner, and wanted to include an image that suggests or symbolizes the pairing, but drawing (no pun intended) a blank at the moment. Suggestions welcome.

Are you watching it? I'm really liking this series,Cobie is great in it,and there's also a dynamic in the series that reminds me a lot the one between Barney and Robin. I'm talking of Lisa (Cobie's character) and Nick. They're really similar to our Barney and Robin (but of course nothing will be like the original).